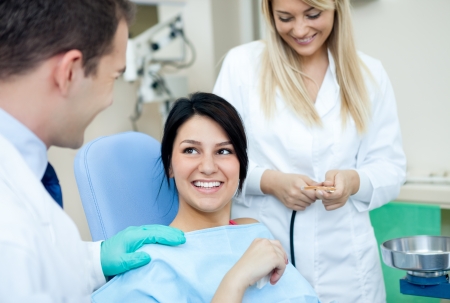 It’s been known for ages that prevention is better than cure. In order to ensure that we have a healthy white smile, it is enough to visit a dentist every six months in order to have a check-up and undergo a scaling procedure.
It will allow for early detection of tooth decay and its treatment preventing its decay development and dangerous consequences. Thanks to regular check-up visits it is possible to detect periodontal diseases and start treating them immediately.

Plague is formed due to various pigments from food that are deposited on the surface of our teeth. The most common causes of plague is the intake of strong black coffee, tea, and red wine that contribute to discolorations on our teeth. Moreover, food rich in such colourful spices as red pepper or turmeric results in disadvantageous change in the colour of our smile.
Smoking cigarettes is another risk factor. Build-up of plague resulting from nicotine smoke ”sticking” to tooth enamel is of characteristic brown-black colour, covers most frequently front teeth creating an aesthetic problem but also leading to gum diseases.
Tartar is caused by food remains deposited around teeth, along the gum line and in interdental areas. Tartar build-up eventually hardens and is extremely hard to remove at home.
Plague forms within 6 hours after heating. Only mature plague is visible and has a yellowish colour. Initially it is invisible to our eye and can be detected only when coloured with special disclosing tablets. Pigment from the pill connects chemically with plague and colours it pink, showing us which places need extra brushing. It is recommended especially for children who are just learning how to take care of teeth, as learning through experiments is great fun! 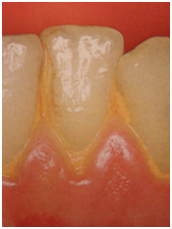 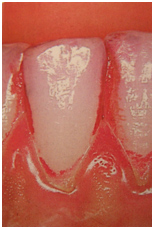 Mature plague is clearly visible even Plague disclosed with special preparation with naked eye, is yellow and forms at the gum lined

Both plague and tartar can be removed by proper brushing, however, in time and due to its growth, home methods are no longer efficient. Then it is recommended to see a dentist who will easily remove the problem with special equipment, ensuring that your teeth are naturally white again.

What is professional cleaning?

The treatment can be divided into 3 stages. 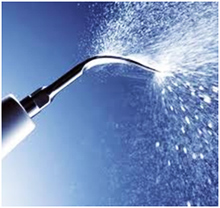 Firstly, plague is removed with ultrasonic scaler, whose vibrations help to remove the plague, whilst water washes out its fragments.

Scaler helps remove both visible concretions above gums and those that are deeply hidden under the gums. Treatment is usually painless leaving the teeth smooth and plague free. If discomfort is felt during the treatment, it is possible to administer regional block anaesthesia.

It sometimes occurs that in case of huge concretions present below gum lines, treatment needs to be repeated on 2 visits. The first visit is then treated as initial cleaning, the next visit takes place after about 1 week, when the gums constrict and previously hidden concretions become visible.

The next stage is the removal of plague and discolorations caused by coffee, tea, cigarettes or red wine. Residue is removed with a dental sandblaster, from which sodium bicarbonate is extracted under pressure in the form of wide powder of a wide range of flavours. Sodium bicarbonate grains hit the plague causing it to detach from the teeth surface. After sandblasting, teeth are significantly brighter and seem whitened. 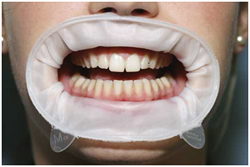 In ENDODENTICA we use a modern KAVO sandblaster. It allows us to remove the residue from even most inaccessible places.
Sandblasting is done with the use of a special OPTRA GATE lip and cheek retractor, which efficiently protects the cheeks and lips of the Patient against sodium bicarbonate, significantly increasing the comfort of the treatment.
Professional cleaning ends with precise polishing of teeth, which prevents against fast plague build-up on cleaned surfaces.

After the treatment each Patient is given a FREE toothpaste adjusted to their needs. Thanks to that you will be able to sustain the effects of the treatment using products that will best serve your needs.

How often is it necessary to remove plague and tartar?

Is sandblasting harmful to enamel?

No. Properly conducted scaling, sandblasting or polishing do not have a negative impact on tooth enamel.

Scaling or sandblasting – what to choose?

The selection of a proper treatment depends on the needs of the Patient. If a Patient has only plague not tartar, sandblasting is sufficient.

In case of tartar, sandblasting is not sufficient, it is necessary to carry out scaling.

Usually it is recommended to undergo both sandblasting and scaling, since there is rarely tartar without plague.

How to take care of teeth at home?

Prophylaxis at home is as important as professional cleaning and medical treatments. Therefore, it is important to take care of mouth hygiene properly. 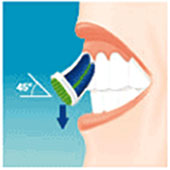 Place bristles at 45 ° angle towards the gumline and then  brush the tooth surface 5-10 times using back & forth or rolling motion. 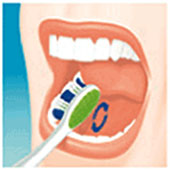 Tongue and  palate should be brushed in the same way, repeating the movement in each sector 5-10 times. 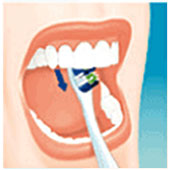 Brushing-away movement should be used to clean lingual surfaces of front teeth. 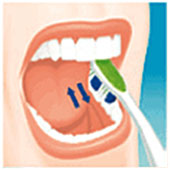 Occlusal surfaces of upper and lower teeth are cleaned with a back-and-forth motion. 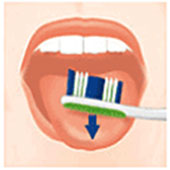 Then we brush the surface of the tongue. 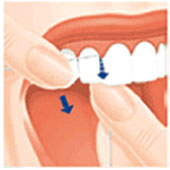 Finally, all interdental spaces should be flossed.

We use cookies to ensure that we give you the best experience on our website. If you continue to use this site we will assume that you are happy with it.Ok